If you live in, visit or travel through rural or any small town in South India very early in the morning, you are bound to see this – women cleaning the entrances to their homes and drawing white colored patterns. That’s Kolam for you.

Kolam refers to intricate patterns drawn using rice powder at the entrance (courtyard) to a home/temple in Southern India. Traditionally, the courtyards were either mud or cow-dung plastered. It is an age old tradition to sweep the courtyards using a broomstick, sprinkle cow dung water, and draw the kolam before sunrise. Yes, I have done this as a kid 🙂 . Before you go all “chee” “yuck” on me 😛 , let me tell you that this paste was and is still applied to floors and walls of rural homes in India as it’s believed to be a disinfectant , an insulator and has a pleasant smell. And, plastering entrances with cow dung also helps from soil/dust flying into the houses.

The patterns were made using rice powder to feed ants, small insects and birds, thus welcoming them into our daily life. They can be drawn by joining dots (pulli), by going around the dots or free hand. The pattern would be drawn in such a way that one should not be able to traverse across without touching the rice powder. This is believed to keep evil from entering the house. But, I think this was to keep the ants busy within the pattern :).

The type of drawing I have above ( the lines go around the dots) is called a Sikku Kolam ( meaning a windy, twisty pattern ) and is a very small one actually ( You will be boggled at the sizes and intricacies involved in certain sikku kolams ).The pattern in the picture is called a Théru Kolam, meaning a chariot pattern, and this specific one is Ekachakra meaning single wheeled. This is usually drawn during Ratha Saptami. Sometimes, rice powder mixed with water is used to draw and they are called Maavu Kolam. Patterns adorned with flowers are called Poo Kolam. The northern counterpart is called Rangoli, aptly named as they are very colorful.

Things have changed a little with times as people moved to bigger cities and became apartment dwellers. Still, the entrance is swept clean and mopped before drawing a kolam. White rock powder/chalk powder/chalk is used now instead of rice powder. Drawing with rock/chalk powder is way easier as you control the flour flow better. Paint and Vinyl stickers are being used for longevity. And for people who find it difficult to draw, you get stencils with patterns on them. You could just sweep some flour on the sieve and you will have your pattern on the floor.

It used to be our job to mop the floor and draw every morning up until we left home for work. Any major festival was a means to showcase our kolam drawing skills. All the girls would be on the street drawing patterns at their entrances all night long, with the elders correcting when a line would go astray, or the dots go incorrectly. Discussions are held on which one’s the best and why/how. There would be some who cannot see past their own 😀 . Festivities were never complete without the quintessential Kolam.

I cannot draw them at my entrance living in an US apartment. So, I drew one and hung it on the wall. Isn’t it lovely 😄 ?

I am Ashtalakshmi Thiagarajan, a software engineer by profession who loves gardening, drawing, travelling, cooking, DIYs etc. I hail from a small town in India but live in the United States currently. This blog is an attempt to put my thoughts/musings into words and share my experiences with you. View all posts by ashtalakshmit 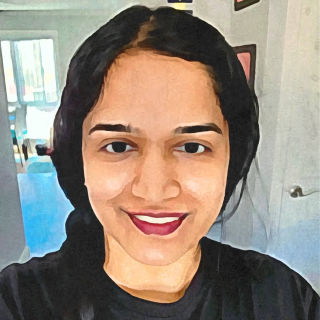 I am Ashtalakshmi Thiagarajan, a software engineer by profession who loves gardening, drawing, travelling, cooking, DIYs etc. I hail from a small town in India but live in the United States currently. This blog is an attempt to put my thoughts/musings into words and share my experiences with you.

© Ashta Thiagarajan and EnManadhil.com, 2017.
Unauthorized use and/or duplication of this material without express and written permission from this site’s author and/or owner is strictly prohibited.
Excerpts and links may be used, provided that full and clear credit is given to Ashta Thiagarajan and EnManadhil.com with appropriate and specific direction to the original content.
%d bloggers like this:
%d bloggers like this: